The 200-foot, three masted sailing school vessel was seven years and $12 million in the making when she embarked on her maiden voyage in 2015. Instead of sailing south in late 2018 as the ship had done in previous years, the Board of Directors took a strategic pause in operations in recognition that their existing operational model was unsustainable. The ship was laid up for the winter at Goodison’s Shipyard in Quonset, R.I., and all staff and crew were laid off.

“We explored different options for the ship, even one of selling it to a corporation,” said OHPRI’s new Chairman Avery “Whip” Seaman, “but really the best plan for Oliver Hazard Perry is for her to remain here in Rhode Island serving the people of Rhode Island and adjacent coastal communities with year-round programming.”

OHPRI’s new operating model will pivot away from long offshore voyages that impact the fewest people at the greatest capital expense. Operations will consist of a mix of multi-day, single day and dockside programs, with underway voyages offered from late spring through mid-autumn. OHPRI will focus on a “range of revenue opportunities across key stakeholder groups from the marine, maritime and defense sectors, as well as academic and social service organizations, all who view the experiences aboard as a valuable investment in providing professional opportunity in concert with personal development.” This, in combination with a deeper connection to the hospitality and tourism industry, will provide for a more diversified and stable revenue model.

New CEO
To help guide it through this new phase of development, OHPRI has engaged Captain Jonathan Kabak as its CEO. A veteran of maritime training and education, Kabak was most recently Director of Marine Operations for the USMMA Sailing Foundation (affiliated with Kings Point, the Federal Maritime Academy) and continues to serve as an adjunct curriculum developer and instructor at the U.S. Maritime Resource Center in Middletown, R.I. No stranger to Tall Ships, Kabak sits on the Board of Directors of Tall Ships America, where he chairs their Ship Operations and Safety Committee and Annual Conference Planning Committee.

Critical Financial Support
OHPRI recently received a $300,000 pledge from an anonymous donor in support of the Board’s commitment to provide $600,000 of start-up capital required to launch the ship and commit to programming contracts. “These funds reflect the future revenue from our upcoming programs and allow us to cover our expenses until we receive payment,” said Kabak. The organization also received a $10,000 grant from the Phyllis Kimball Johnstone & H. Earl Kimball Foundation to convert two 40’ shipping containers used for storage into mobile workshops. “These contributions provide the momentum we need to embark on our new programs,” said Kabak. 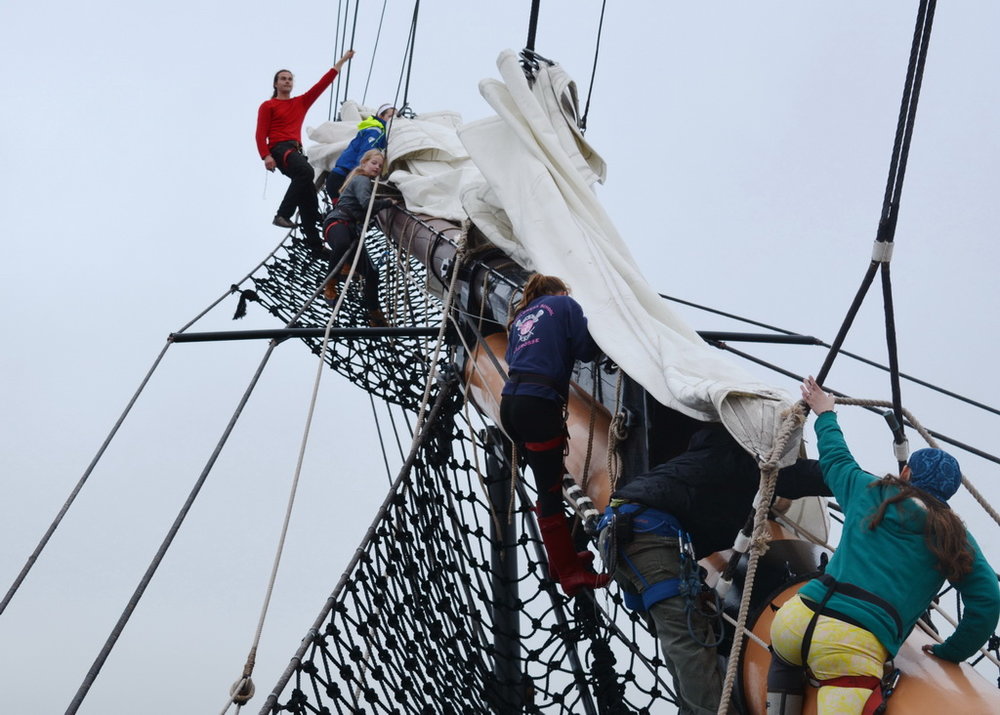 Raye Montague STEAM Initiative
Named in honor of the African American woman who was the United States Navy’s first female Program Manager and produced their first ship designed with a computer (the Oliver Hazard Perry Class Frigate), OHPRI’s Raye Montague STEAM Initiative will provide hands-on experiences related to the design, construction and operation of a ship. Through these experiences, both underway and alongside, the organization will transcend the teaching of basic seamanship and provide a challenging platform for leadership development, technology and innovation, civic engagement, and ocean literacy.

“We’ll begin with organizations and entities in Rhode Island with whom we have existing relationships, including the Rhode Island Marine Trade Association and Composites Association (RIMTA), United States Maritime Resource Center (USMRC), Naval Academy Prep School (NAPS) and Department of Environmental Management Division of Parks and Recreation and the Fort Adams Trust,” said Kabak. “These pilot activities will allow us to leverage the use of the ship to better serve our community year-round, both in full operations May through October, and in limited operations and creative non-operational fashion, throughout the remaining months of the year.”

Kabak added that OHPRI is finalizing details of its first program in partnership with RIMTA. In March, while the ship is still on shore at the shipyard, the organization will begin providing hands-on experiences in support of RIMTA’s Pre-Apprenticeship Training program for the Marine Trades in shipyard operations and vessel maintenance. Perry is slated for launch in April for continued fitting out and dockside program offerings at her berth at Fort Adams State Park before beginning underway programming in May.

Said Kabak: “Oliver Hazard Perry Rhode Island recognizes the challenges that we have faced in our effort to bring life-changing experiences at sea to youth, and we have rededicated ourselves to continuing to provide these types of experiences to broader audiences, through more diverse programming, and with a fundamental commitment to sustainable business practices that will allow us to proudly operate Rhode Island’s Official Tall Ship well into the 21st Century.”