"We have met the enemy and they are ours."

Commodore Oliver Hazard Perry was a native son of Rhode Island, American naval officer, and hero of the War of 1812, most well known for his victory over the British Royal Navy in the Battle of Lake Erie in 1813. He came from a military background; his father was U.S. naval captain Christopher Raymond Perry, and his younger brother Matthew Calbraith Perry would eventually become known as the “Father of the Steam Navy” and instrumental in the opening of Japan to Western trade in 1854.

At the young age of thirteen, Perry wrote to his father, then a captain with his own ship, asking to join the navy. The average age of a midshipman was seventeen, but his father Christopher granted his thirteen-year-old son a midshipman’s berth on his ship, the USS General Greene. Young Oliver took to naval life, and after several posts both aboard ship and in his home state of Rhode Island, he received his first command in 1809, the schooner USS Revenge. Perry commanded the vessel until 1811, when the ship hit a reef off the coast of Rhode Island and sank. Perry was granted a year’s leave from the Navy, during which he married Elizabeth Champlin Mason in Newport. They would go on to have four surviving children, with one child dying in infancy.

Oliver Hazard Perry and the Battle of Lake Erie

Tensions between the new nation of the United States and Britain grew high due to the Napoleonic Wars being fought across the Atlantic, and on June 18, 1812, President James Madison signed a declaration of war with Britain. In January 1813, Perry was assigned command of U.S. naval forces on Lake Erie, an area mostly controlled by the British. Despite British blockades, by late summer 1913, Perry had mostly completed the construction of a U.S. naval fleet off Presque Isle, Pennsylvania.

Oliver Hazard Perry and the Battle of Lake Erie, 1813

On the morning of September 10, 1813, British naval forces attacked. Aboard his flagship, the USS Lawrence, Perry directed his fleet into the battle, but because of light winds, the sailing vessels were slow to maneuver, and Lawrence suffered heavy casualties before Perry’s second flagship, the USS Niagara, could come into range to assist. With four-fifths of his crew killed or wounded, Perry made the decision to surrender his ship and transfer his remaining crew and battle flag to the Niagara. He was rowed half a mile under heavy fire, bearing his now-famous blue and white battle pennant with the words “Don’t Give Up The Ship.”

The British expected Perry, the Niagara, and the rest of the American fleet to retreat after the surrender of the Lawrence; however, Perry perceived that the British had also suffered heavy losses, including most of their commanding officers, and rejoined the battle. At 3:00 pm, the British fleet surrendered, marking the first time in history that an entire British naval squadron had surrendered to an American vessel. Perry wrote to General William Henry Harrison:

We have met the enemy and they are ours. Two ships, two brigs, one schooner and one sloop.

Yours with great respect and esteem,
O.H. Perry

Oliver Hazard Perry was awarded the Congressional Gold Medal in 1814 for his actions in the Battle of Lake Erie and the War of 1812. Perry later went on to command a diplomatic and anti-piracy naval mission to Venezuela. He died of yellow fever in 1819 at the age of 34, at sea underway to Trinidad to seek medical aid. His remains were eventually brought home to the United States and now lie interred in Newport’s Island Cemetery. 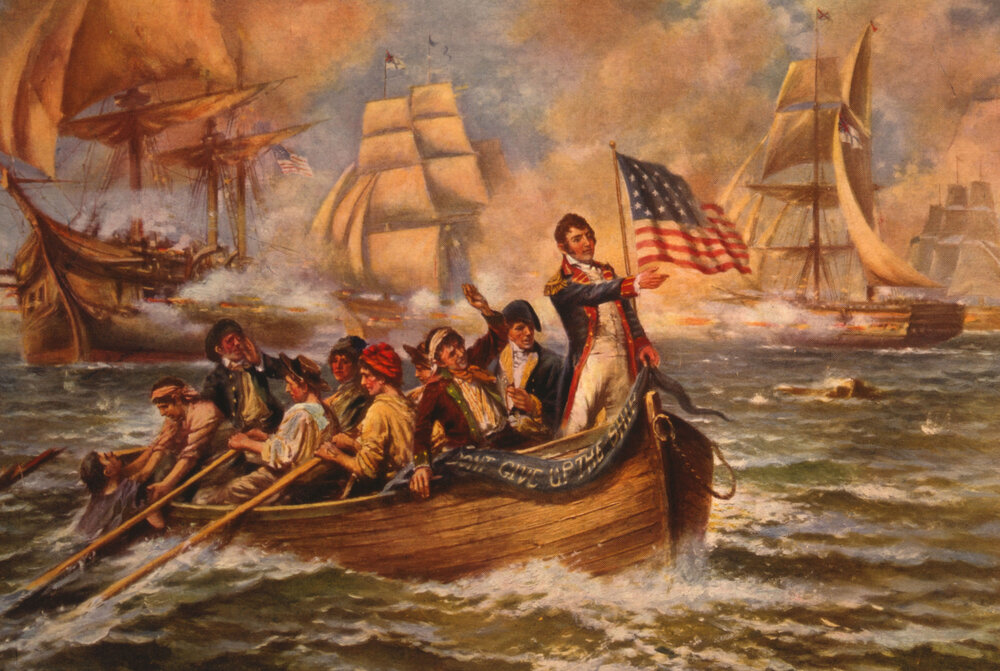 Oliver Hazard Perry is rowed across Lake Erie to take command of the USS Niagara, escaping his damaged ship, the USS Lawrence.

Your ticket for the: Commodore Oliver Hazard Perry